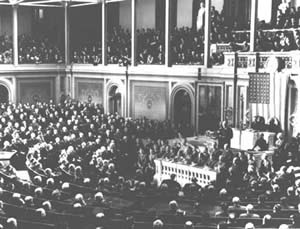 Mr. Vice President, Mr. Speaker, Members of the Senate, and of the House of Representatives:

Yesterday, December 7th, 1941 -- a date which will live in infamy -- the United States of America was suddenly and deliberately attacked by naval and air forces of the Empire of Japan.

The United States was at peace with that nation and, at the solicitation of Japan, was still in conversation with its government and its emperor looking toward the maintenance of peace in the Pacific.

Indeed, one hour after Japanese air squadrons had commenced bombing in the American island of Oahu, the Japanese ambassador to the United States and his colleagues delivered to our Secretary of State a formal reply to a recent American message. And while this reply stated that it seemed useless to continue the existing diplomatic negotiations, it contained no threat or hint of war or of armed attack.

It will be recorded that the distance of Hawaii from Japan makes it obvious that the attack was deliberately planned many days or even weeks ago. During the intervening time, the Japanese government has deliberately sought to deceive the United States by false statements and expressions of hope for continued peace.

The attack yesterday on the Hawaiian islands has caused severe damage to American naval and military forces. I regret to tell you that very many American lives have been lost. In addition, American ships have been reported torpedoed on the high seas between San Francisco and Honolulu.

Yesterday, the Japanese government also launched an attack against Malaya. 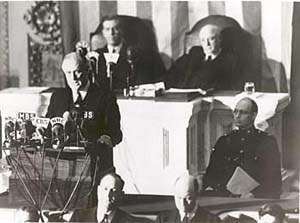 And this morning, the Japanese attacked Midway Island.Japan has, therefore, undertaken a surprise offensive extending throughout the Pacific area. The facts of yesterday and today speak for themselves. The people of the United States have already formed their opinions and well understand the implications to the very life and safety of our nation.

As commander in chief of the Army and Navy, I have directed that all measures be taken for our defense. But always will our whole nation remember the character of the onslaught against us.

No matter how long it may take us to overcome this premeditated invasion, the American people in their righteous might will win through to absolute victory.

I believe that I interpret the will of the Congress and of the people when I assert that we will not only defend ourselves to the uttermost, but will make it very certain that this form of treachery shall never again endanger us.

Hostilities exist. There is no blinking at the fact that our people, our territory, and our interests are in grave danger.

With confidence in our armed forces, with the unbounding determination of our people, we will gain the inevitable triumph -- so help us God.

I ask that the Congress declare that since the unprovoked and dastardly attack by Japan on Sunday, December 7th, 1941, a state of war has existed between the United States and the Japanese empire.

Meanwhile, back in Cherry Point, N.C., a smart and pretty secretary maneuvered her way to the front desk where she could personally check in the pilots.

Betty Tyson immediately noticed  the tall handsome officer from Arkansas.  He had it all - good looks, good breeding and wore his uniform very well. 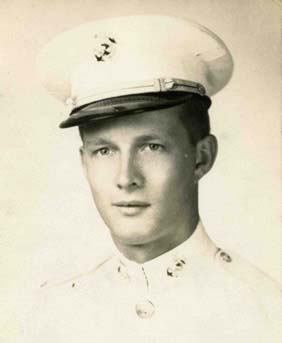 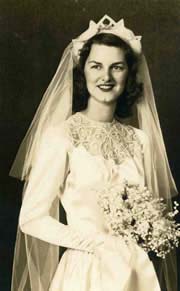 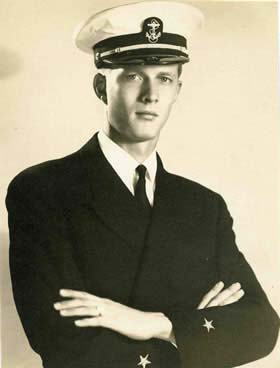 January 1944:  Squadron morale had climbed and all members were anticipating an early move to the Pacific.

February 1944:  Training flights continued with an emphasis on gunnery, navigation, bombing runs, and night flying.  The squadron  now had its full complement of 15 aircraft when it received orders to relocate to  Naval Air Station (NAS) Boca Chica, Florida for torpedo training.

Besides torpedo training at Boca Chica, numerous navigation hops to various parts of the United States and Cuba were performed, with many hours of night and instrument flying.  Aircraft were in the air daily from 5:00AM to 10:00PM.  Live bombs were dropped on towed targets and these targets were also strafed. 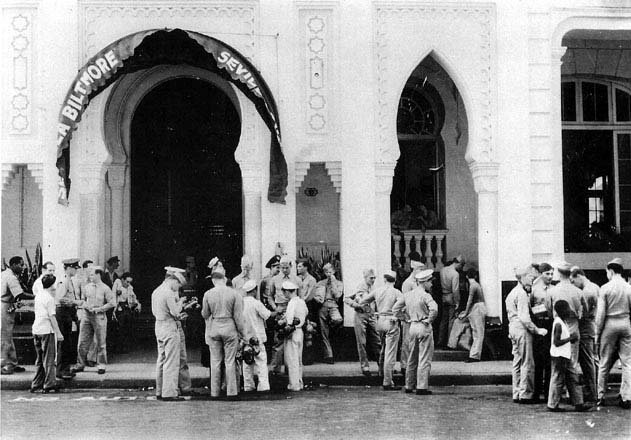 While on leave in Havana, a group of the officers procured a large supply of high quality liquor at bargain prices.

March 1944:  Morale was high as VMB-613 completed their training at Boca Chica and returned to Cherry Point.

Just as it looked that they would shortly be deploying to the Pacific, orders were issued instructing the squadron to detach 13 aircrews as replacements for Marine Bombing Squadrons that were already actively engaged in combat operations.

With this order, it became readily apparent to all that VMB-613 would not be deploying anytime soon.  As a result, morale dropped, and rumors and speculation became the prime topics of conversation.

About this time, it was learned that the squadron was to be equipped with the PBJ-1H.  This would further delay the squadron's departure for the Pacific since this aircraft with its heavy forward-firing armament would change the entire mission of the squadron from that of medium-altitude horizon bombing, to one of anti-shipping and close air support.

In light of the new aircraft they were to be assigned, officers and men were sent to various locations throughout the country to learn about this aircraft and its equipment. 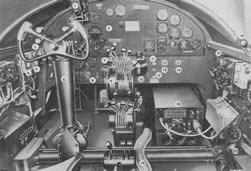 July 1944:   Rumors circulate that the squadron would be moving to another airfield since Cherry Point had become overcrowded.  This rumor proved to be true.

Newport was not too far from Arkadelphia and Bob was able to visit his mother, Annie Lou.  After Bob deployed overseas, Betty stayed with Annie Lou while waiting on the birth of their first child, Robert S. Ligon, Jr.

September 1944:  The squadron's PBJ-1Hs began to arrive at Newport from their last modifications at Cherry Point.

Rumors again began to circulate that the squadron would be deploying to the Pacific within a short period of time.  Again, these rumors proved to be true when the squadron received orders to proceed overseas in the latter part of October.  In preparation for deployment, insurance and wills were put in order.

October 1944:  The squadron began the first leg of their deployment overseas, beginning with the departure of the air echelon.  All 15 of the squadron's PBJ-1Hs took off from Newport, Arkansas, headed for El Paso, Texas.  In order to conduct a fuel consumption test during this leg of the flight, each aircraft departed Newport at five-minute intervals.  Upon arrival at El Paso, the aircraft were refueled and departed for  El Centro, California, and from there to North Island, California, arriving on the 22nd of October.

The air echelon enjoyed one last liberty in Los Angeles, then boarded the USS Tulagi and departed for Pearl Harbor, Hawaii on October 30th. 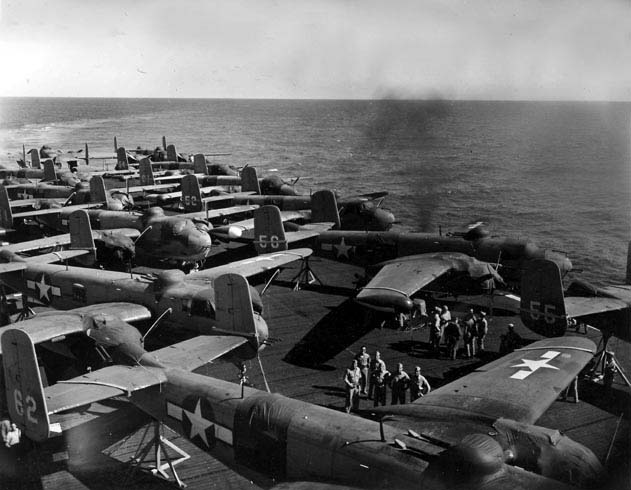 The fifteen PBJ-1Hs of VMB-613 crowd the flight deck of the USS Tulagi as the squadron's air echelon departs San Diego for Pearl Harbor.

The crossing to Pearl Harbor was filled with excitement as the USS Tulagi, sailing without escort, took action to evade the Japanese submarine I-12 that had been reported in the area.

In Pearl Harbor, the pilots became proficient in learning to dive their aircraft at exactly 15 degrees and estimate ranges of 1,500, 1,000, and 500 yards.

December 1944:  Following the arrival of the ground echelon, all pilots received additional training in survival and resisting interrogation, should they be captured.

With additional training completed, both the air and ground echelons prepared to depart for their destination in the Pacific, Kwajalein Atoll, Marshall Islands 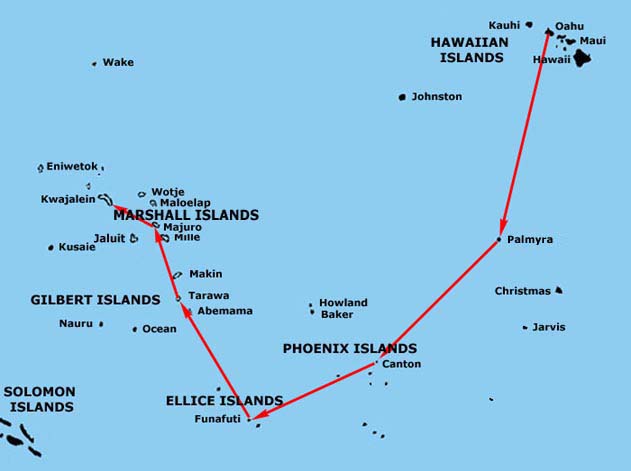 On December 10th the movement began with the USAT Julian departing with the squadron's ground echelon for Kwajalein. By December 19th all 15 aircraft had arrived on Kwajalein without serious incident. 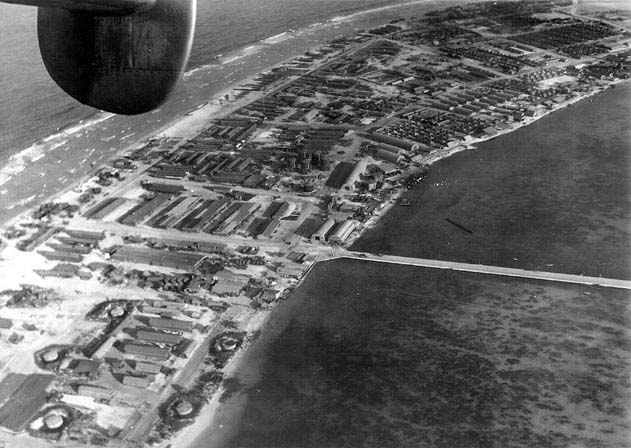 Totally denuded by combat, the atoll of Kwajalein was nothing more than a landing strip with primitive barracks and offices. 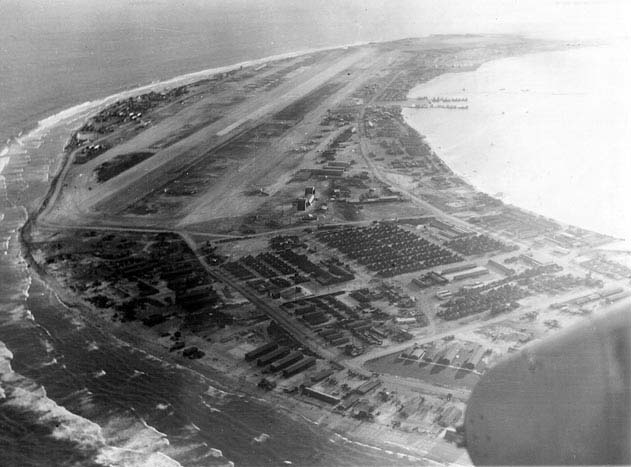 The squadron was assigned to an area that consisted of 15 wooden buildings, previously used by an Army Bomber Group.

Unfortunately, when this group departed they had completely stripped the buildings of virtually everything including electrical wiring, light bulbs, plumbing and fixtures.  Although two heads had been left, these had been closed by the island's doctors.

The air echelon, left with little choice, slept on the floors of these buildings, anxiously awaiting the arrival of the ground echelon with all the necessary gear and equipment to make the buildings livable. 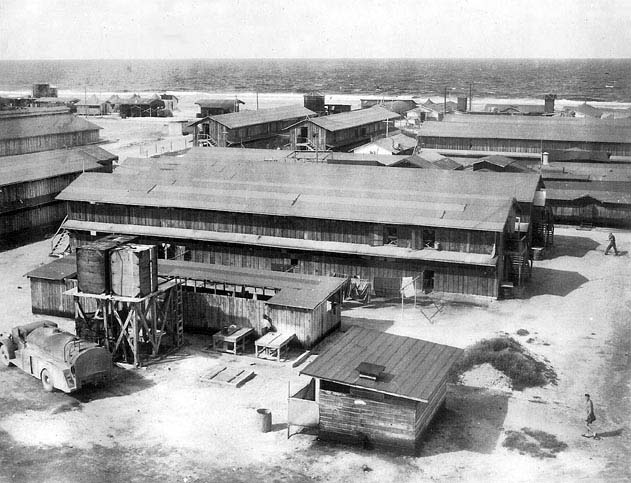 Showers to the left - head in right foreground

On December 23, 1944, the ground echelon arrived at Kwajalein and disembarked from the transport.  Work on the squadron area began the following day.  The priority was to establish the squadron's mess hall.

Christmas 1944 passed as the squadron struggled to prepare its quarters. 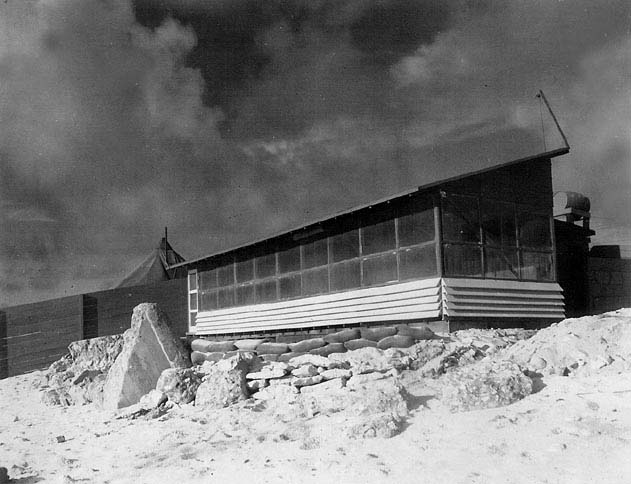 Work on the remaining area continued until all the men had settled-in and the squadron's area was in order.

VMB-613 performed anti-shipping operations and harrassment against the bypassed Japanese forces in the Marshall and Eastern Caroline Islands. 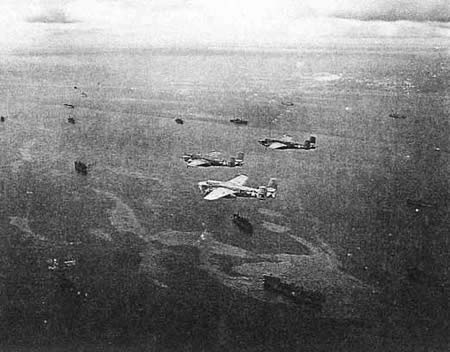 A convoy sails under the watchful eyes of three of VMB-613's crews.  Shipping lane patrols began on April 3, 1945 and continued through the end of the war.

January 22, 1945:  VMB-613'S first major action as a unit occurred when nine aircraft were tasked with attacking the Japanese garrison and defenses on Wotje Island, Wotje Atoll. 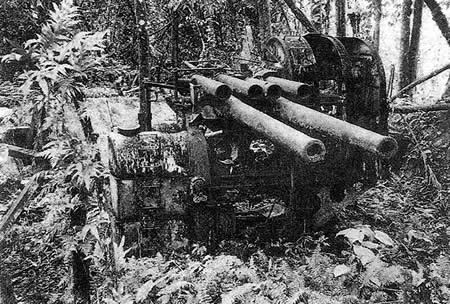 The squadron experienced their first combat casualties when First Lieutenant William  J. Love and his crew were shot down over Ponape during a raid on February 6, 1945. 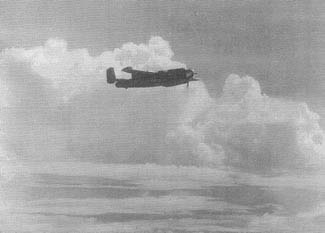 Filled with long monotonous hours of patrol, the Marines of VMB-613 performed their duty in an exemplary manner against a demoralized and increasingly desperate enemy, while maintaining the finest operational safety record of all Marine Bombing Squadrons.

The efforts of both  aircrews and  ground support personnel, ultimately contributed to the success of American naval operations in the Pacific. 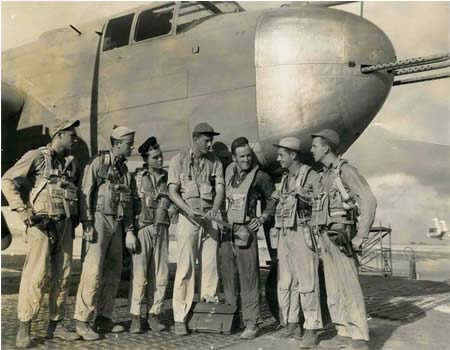 Following V-J (Victory-Over-Japan) Day, the Marine Corps faced the need for a rapid demobilization. With their job finished, the men who had fought the war were anxious to return home as quickly as possible so they could “get on with their lives.” The American public was equally anxious to bring the men back home.

(THIS PAGE IS STILL UNDER CONSTRUCTION)